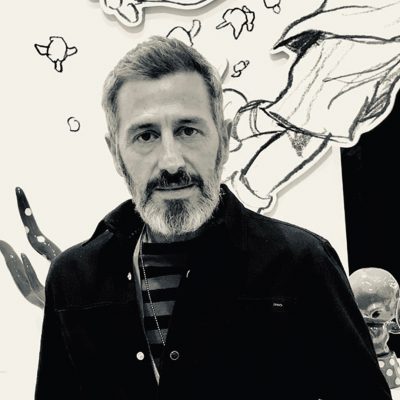 Giovanni Motta was born in Verona in 1971. After studying accountancy, he began working in the world of communication as a creative and advertising designer, collaborating with Emanuele Pirella in Milan, among others. His artistic nature was already evident as a child: at the age of 9 he won an international drawing competition organised by the FAO. At the same time, he became interested in figurative and contemporary art, with a particular interest in the world of Japanese “anime” and “manga”, which were to become essential for his research into the theme that was to become the leitmotif of his work: the inner child. This child is represented by a cartoon-like character design, JonnyBoy. JonnyBoy appears in all his work, in paintings, sculptures and digital works.

A hyperrealist painter and lover of technology, he has been using 3D printing since 2010 to create limited editions and digital animation programmes such as “cinema4D” and “Maya” since 2000.

Together with the Forni Gallery he has participated in numerous contemporary art fairs, Art Verona, St-Art Strasbourg, Art Helsinki and Roma Contemporary.

In September 2020 he exhibited in Switzerland with the solo exhibition “Thanks”. Since 2018 he started collaborating with art galleries in Colombia, China, Switzerland, Belgium and Germany.

He approaches Crypto Arte, a new artistic current where everything is still to be built and where it is possible to rewrite art history. In November 2020 he enters the most important Crypto art gallery in the world: Superrare publishing his first work: “Forgetting”, Edition 1/1 and in January 2021, he is ranked #1 in the world by Superrare for a fortnight. April 2021: solo exhibition in Shanghai with Gallery Func. “GAME OVER Play again” 24 April/6 June curated by international art critic Ivan Quaroni. A second solo exhibition at Gallery Func in Shanghai is planned for 2022. He is one of the artists from the Bosa Ceramiche stable, Italian excellence in the world of artistic ceramics.